It is 39 metres – 170 stairs – to the top of the lighthouse. The lamp is 55 metres above sea level. There’s a fantastic view from the top. The area around Vejers beach and Kallesmærsk heath can be seen to the north and the east. Blåvand and Blåvand beach with the four mules created by the artist Bill Woodrow can be seen to the south-east. Horns Reef offshore wind farm is visible out over the sea.

The lighthouse Blåvandshuk Fyr with its 400 watt lamp, can be seen 23 nautical miles out to sea. Although the lamp is only 400 watts, the prismatic lenses concentrate the light so that the effect is equivalent to that of 180,000 wax candles. Blåvandshuk lighthouse’s signature is three blinks every twenty seconds. 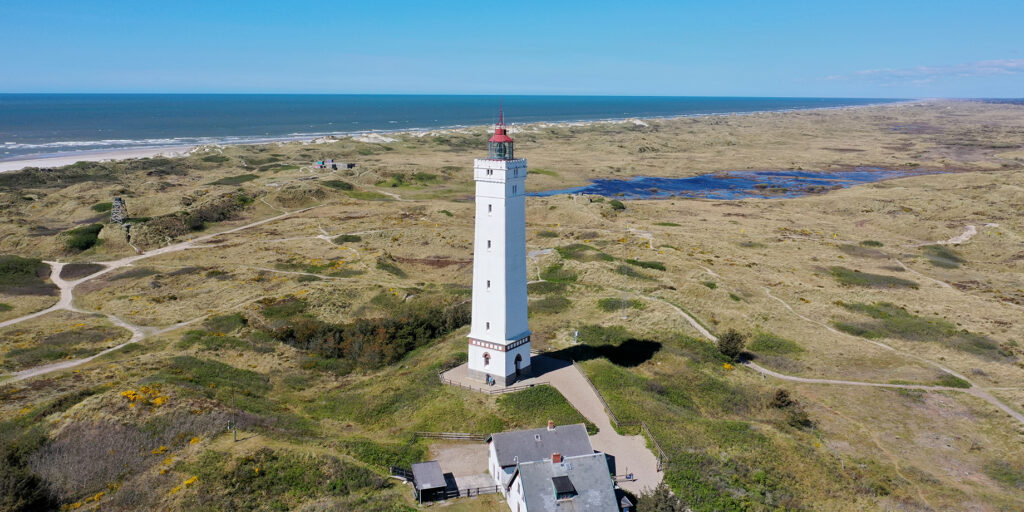 The lighthouse, a so-called approach light, was erected to facilitate entry to Esbjerg harbour, and it also provides a warning of Horns Reef, which stretches about 40 km into the sea to the west.
Blåvandshuk lighthouse was built in 1899 by the master carpenter Kr. Skafte and it was placed on the highest sand dune at Blåvandshuk, replacing a sectored light which had been erected on a wooden beacon 12 years previously. Kr. Skafte’s lighthouse, equipped as a rapid-blink lighthouse with a burner which ran on gas produced from waste fat, shone for the first time on New Year’s Eve 1900. 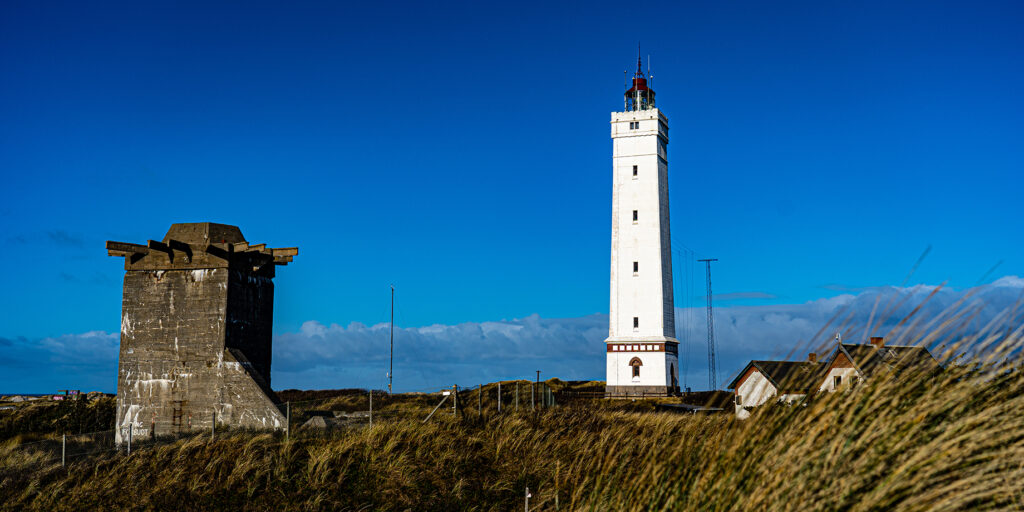 The bunker on the left is part of the German Atlantic Wall. It housed a naval tactical surveillance radar.

The lens circulates via a 4 tonnes heavy clock work

Blåvandshuk lighthouse is protected. Both the installations and the characteristic architecture are thus preserved for posterity. There is a clockwork mechanism up in the tower under the light. This mechanism turned the four ton lens around with the aid of a big weight. 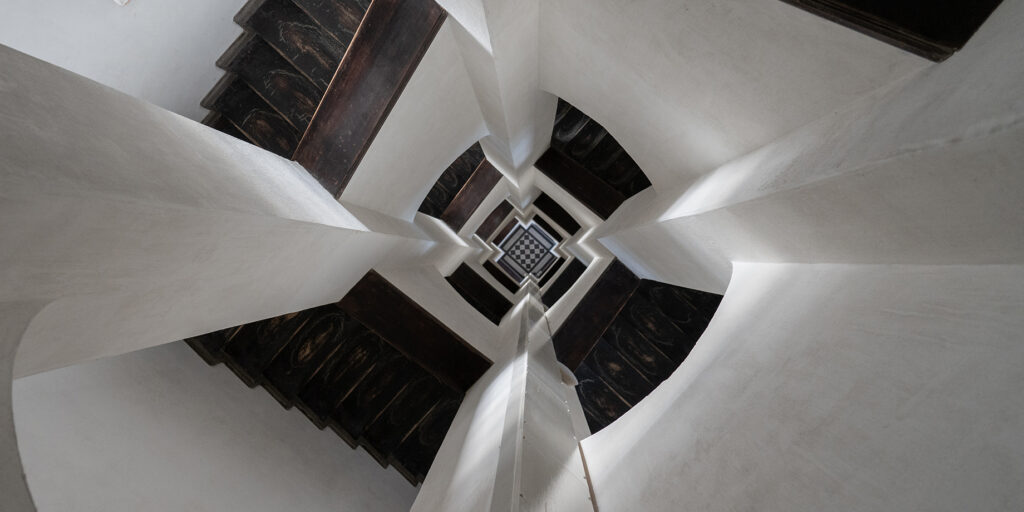 There are 170 steps to the top of the lighthouse!

The lighthouse is now fully automatic, but it functions as it has done throughout all these years. The master’s house is now home to an exhibition on the Horns Reef offshore wind farm, one of the world’s biggest. 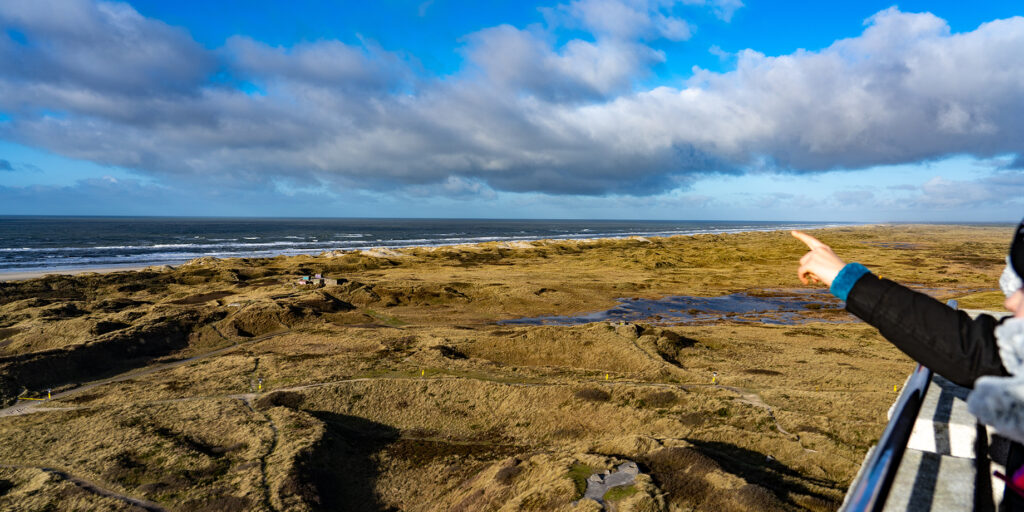 The view from the top towards Horns Rev.

Ice cream and soft drinks can be bought at the ticket counter, which can be enjoyed outdoors. There are also a large selection of restaurants in Blåvand town.

In addition to ice cream and soft drinks, you can buy various souvenirs at the ticket counter.

The lighthouse is not suitable for wheelchair users or people with walking difficulties, as there are 170 steps to the top. The path up to the lighthouse is paved with gravel.

There are parking spaces close to the lighthouse for both cars and buses. 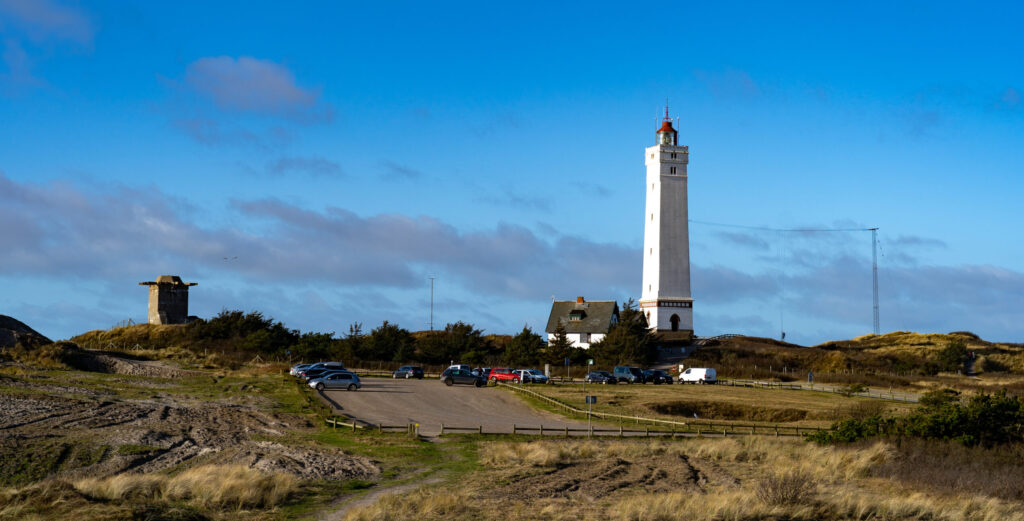 See our prices and options for booking a guided tour of the countryside  – See our offers.

Beneath its surface, the west coast of Denmark conceals an abundance of gripping stories. But you cannot see them with the naked eye. Join us under the sand and discover the countless hidden stories about the west coast: tales of wrecked ships, dangerous smugglers and forbidden love.

FLUGT – Refugee Museum of Denmark forventes at åbne til sommer 2022.

The Blåvandshuk lighthouse stands 18 metres above sea level at Horns Bjerge, Denmark’s westernmost point, position 55 33.51’ N/08 05.07’ E. The lighthouse is now fully automatic, but it functions as it has done throughout all these years. The master’s house is now home to an exhibition on the Horns Reef offshore wind farm, one of the world’s biggest, and it is also home to the Blåvandshuk lighthouse tourist information centre.