The old Tirpitz Bunker looks like a colossus in the sand and contains the story of Hitler’s gigantic bunker project: the Atlantic Wall. Visitors enter the bunker through an underground exhibition tunnel from Tirpitz. Take a good friend by the hand and explore the shadowy World War II bunker.

In August 1944, the German occupying power set about building the huge Tirpitz Battery west of Blåvand. The two huge gun bunkers were part of the Atlantic Wall and were intended to defend the entrance to Esbjerg. But the war ended before the bunkers were completed. Since then they have represented cold evidence of the war in the very heart of the magnificent dune landscape. 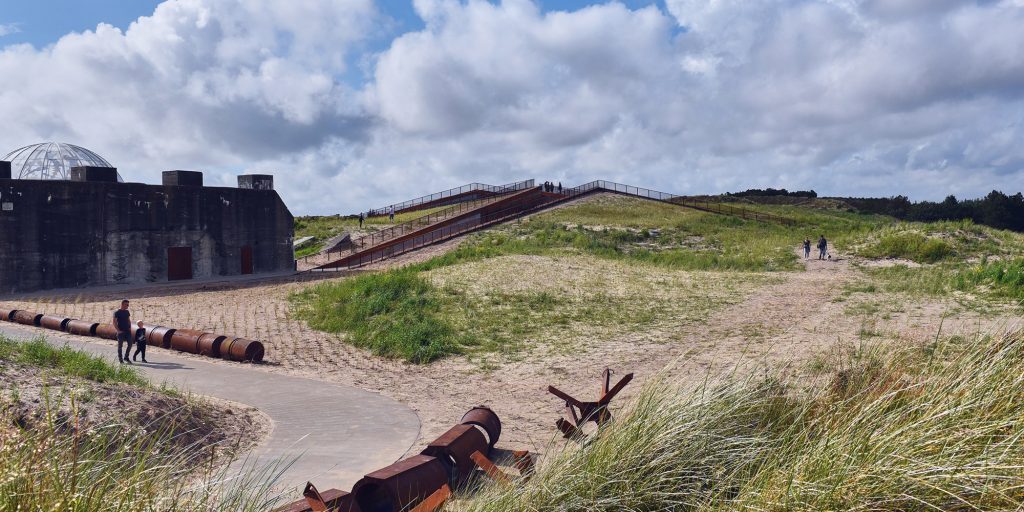 Now the southern bunker has become part of the Tirpitz attraction. Through an underground exhibition tunnel you enter the old gun bunker. Here you can hunt for answers to the many questions concealed behind the 3.5-metre-thick, heavily-reinforced concrete walls. Why was a large battery built right here in Blåvand? Who was supposed to have staffed it? How did the guns work – and how far could they shoot over the sea? If you are a geek at heart, you will have every opportunity to get even wiser. Or, if you are simply after an exciting experience, then the bunker is definitely something for you too!

Aim the large searchlight and discover the hidden secrets of the Tirpitz bunker.

The underground tunnel that connects the new architecture to the old bunker is also part of the exhibition. In five simple steps you can approach the actual bunker. From Germany’s occupation of Poland in 1939, via the plans to fortify the entire Atlantic coast with concrete bunkers to the huge building project at Blåvand. Before you cross the threshold from the new concrete to the cold, raw bunker, you are given a brief introduction to how the bunker was supposed to work – if it had been completed before the end of the war!

Visitors themselves control their personal experience of all the exhibitions in Tirpitz with the assistance of a digital storyteller – an audio-based guide in which the stories were recorded by professional actors. You cannot experience the exhibitions without this guide. It is included in the price of admission and children from about two years of age can use it. It may be a good idea to bring your own headphones if you get easily disturbed or if your arm tends to ache. If you are hearing impaired or just prefer text, please inform the host when you buy your ticket.